Breathe with me: part 1

This project is a key part of my PhD research. We are excited by the positive reception it has received, including being reported on multiple platforms such as CBS news, Neuroscience News and New Scientist. You can also find out more about the first part of this project in our publication:
A calming touch: Design and validation of a tactile aid to ease anxiety. Published in PLOS ONE, 2022. Authors: Alice Haynes, Annie Lywood, Emily Crowe, Jessica Fielding, Jonathan Rossiter and Chris Kent.

The project began as a Brigstow funded collaboration with textiles designer Annie Lywood. The aim of the project was to create an interface for easing anxiety by combining Annie's textile designs with robotic mechanisms.

We began by developing a set of initial interfaces to be tested in a focus group. We considered many form factors and decided on a cushion form for a variety of reasons:

🔸 cushions are a familiar item that most people have in their home and are typically associated with relaxation and comfort.
🔸 for workshops and focus groups the cushion form is accessible and easily engaged with by a diverse range of people - unlike wearables that need to be adjustable and may require people to alter their outfit.
🔸 electronics can be hidden within the cushion and surrounded by padding.

For the first focus group we developed 7 prototype cushions with the following embedded behaviours and effects:

🔸 breathing: an encased silicone bladder connected to a syringe pump inflates and deflates the cushion to simulate breathing.
🔸 heartbeat: an encased motor driving an off centre mass generates a rhythmic pulse to simulate a heart beat.
🔸 purring: a vibration motor pulses on and off to simulate the rhythmic purr of a cat.
🔸 purring and breathing: a combination of both generated by a servomotor pushing two plates apart to simulate breathing and vibration simulating purring.
🔸 warmth: a heat pack embedded in the cushion generates a feeling of warmth.
🔸 travelling light: a spiral of coloured light slow rotates within the cushion.
🔸 sound: soothing sounds are generated by textile touch sensors on the cushion.

We ran a focus group with these cushions to find out how people respond to them and whether any had the potential to be developed further into an anxiety aid. The designs were based on interactions that people find soothing (such as stroking a purring cat or hugging a hot water bottle) as well as meditative practices (such as guided slow breathing and listening to music). 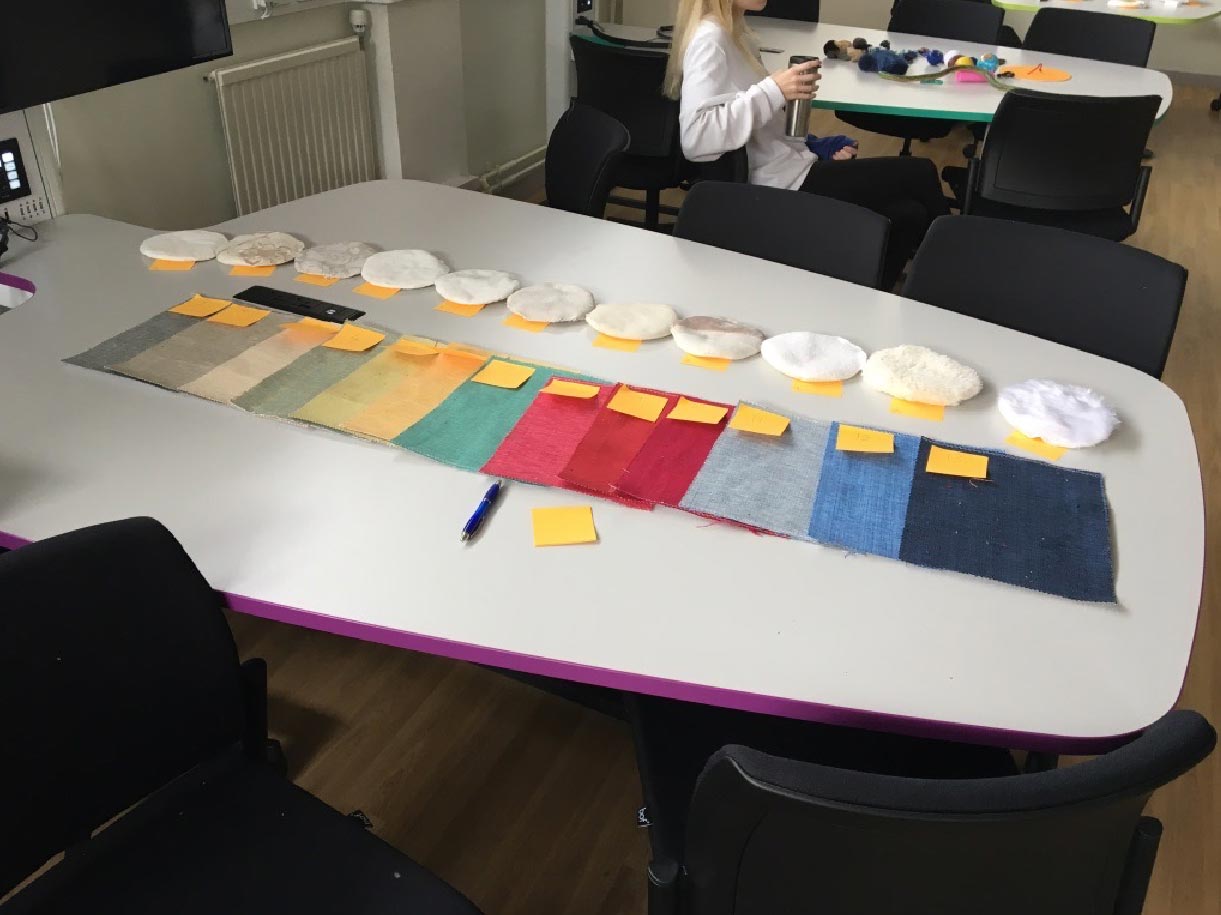 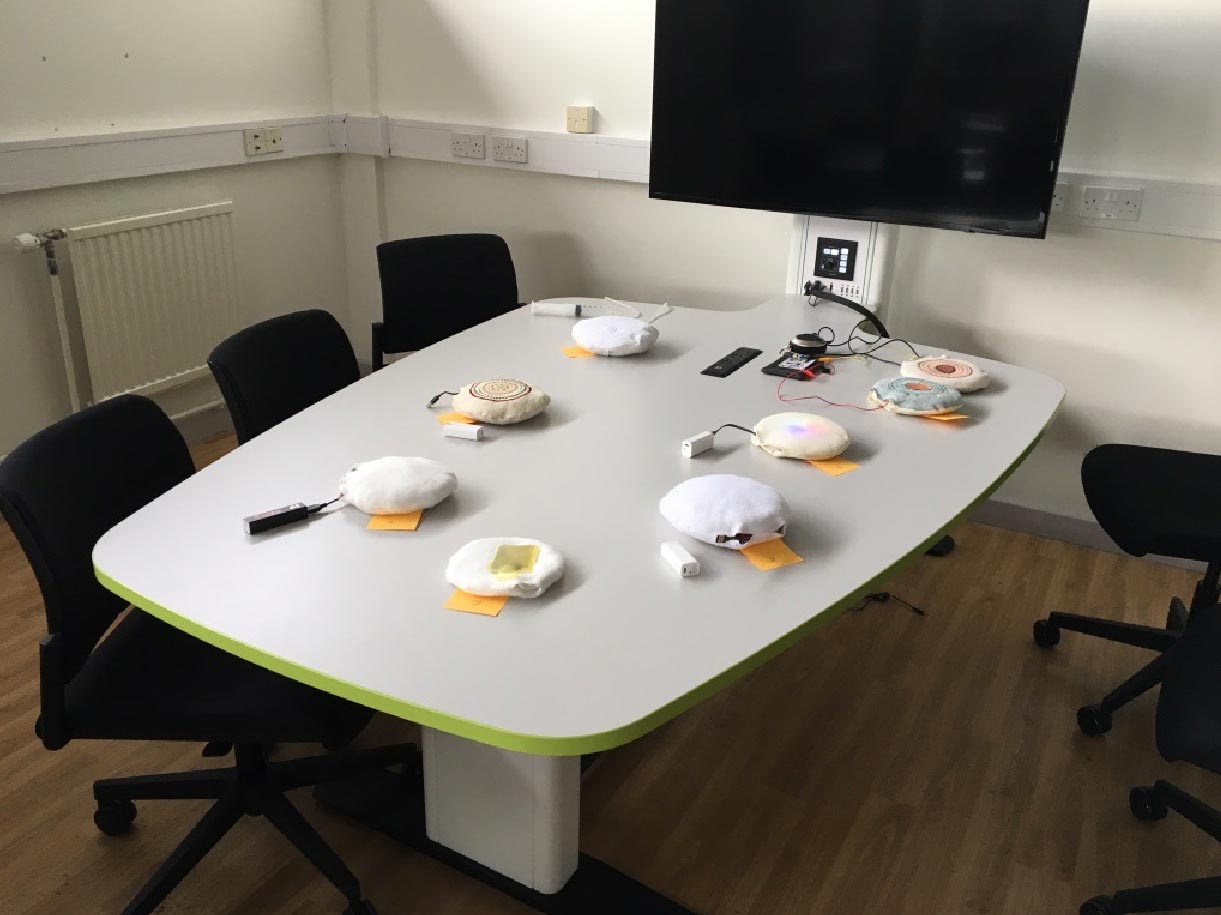 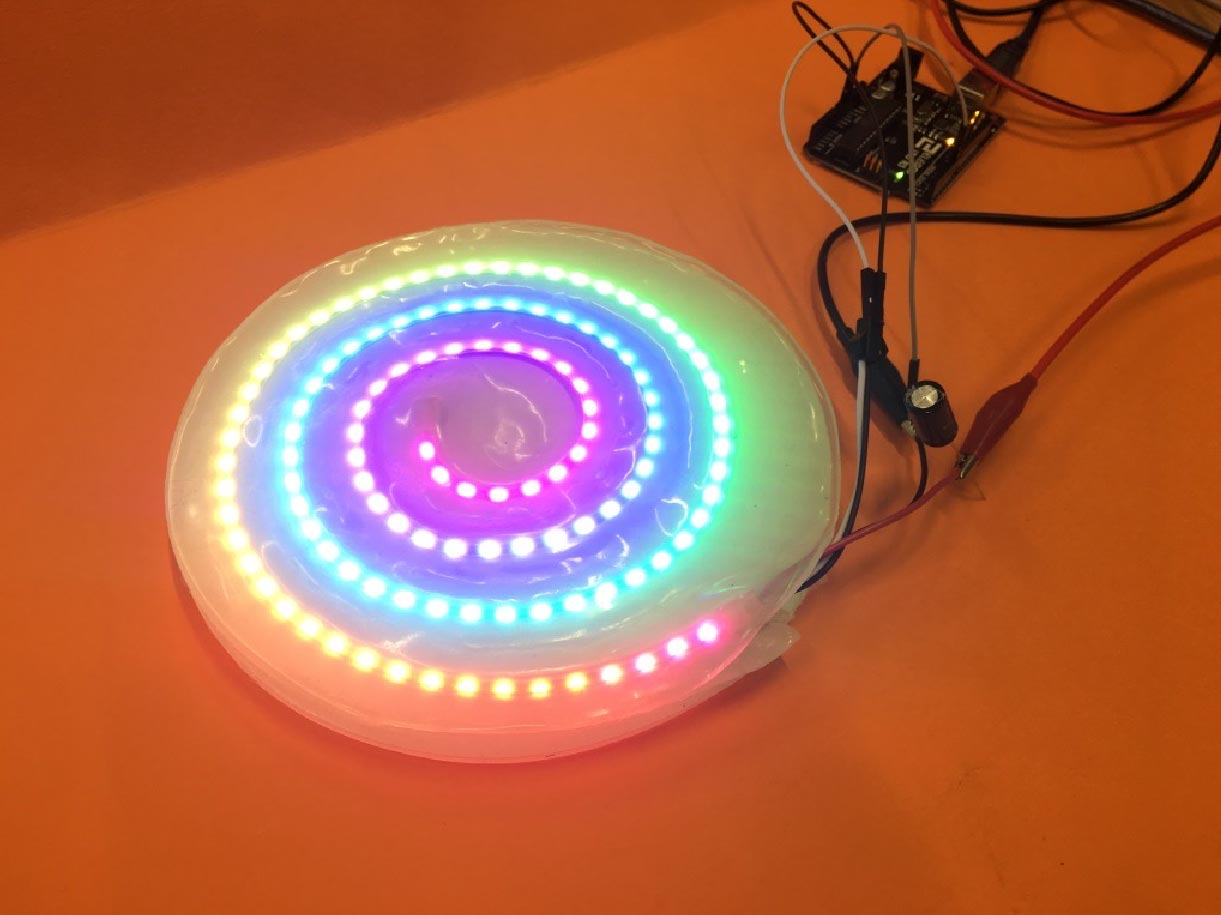 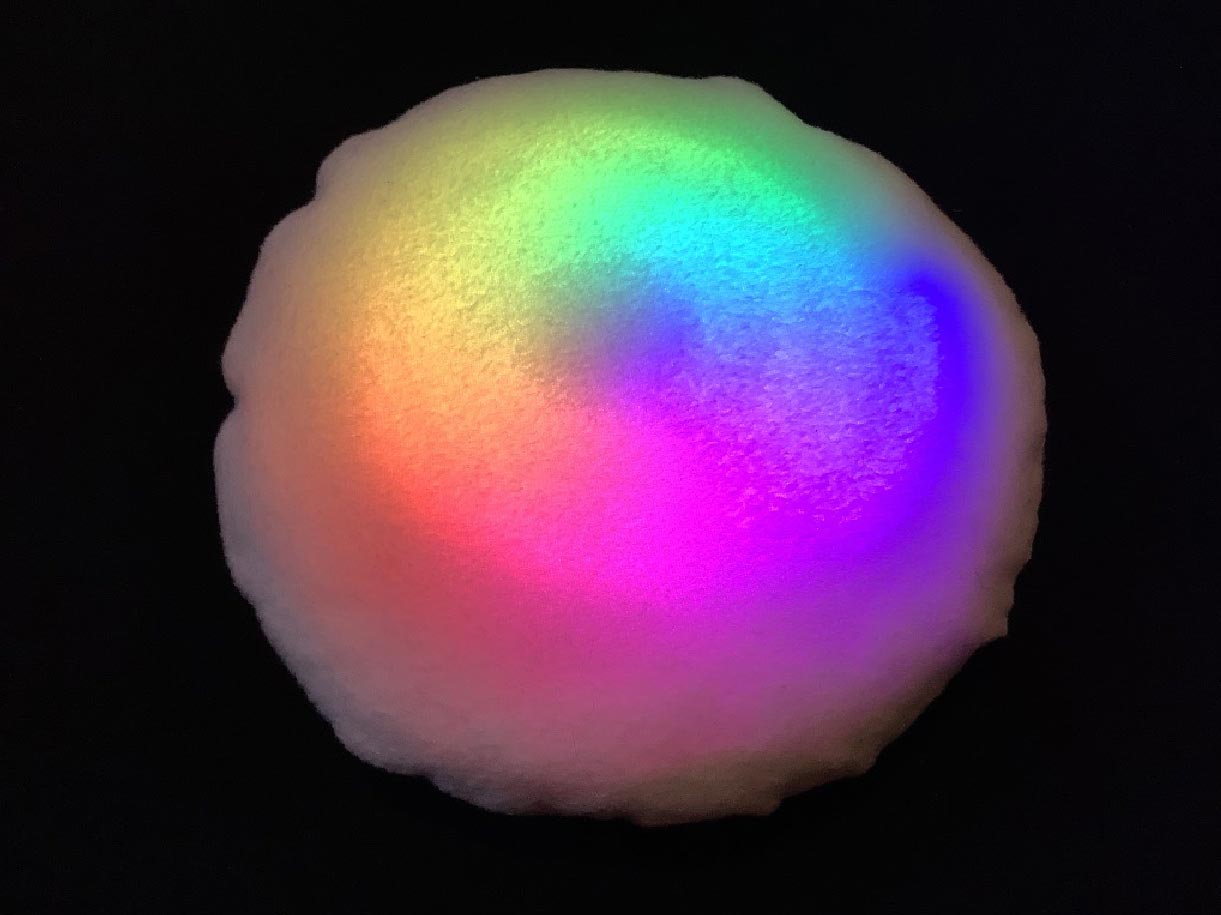 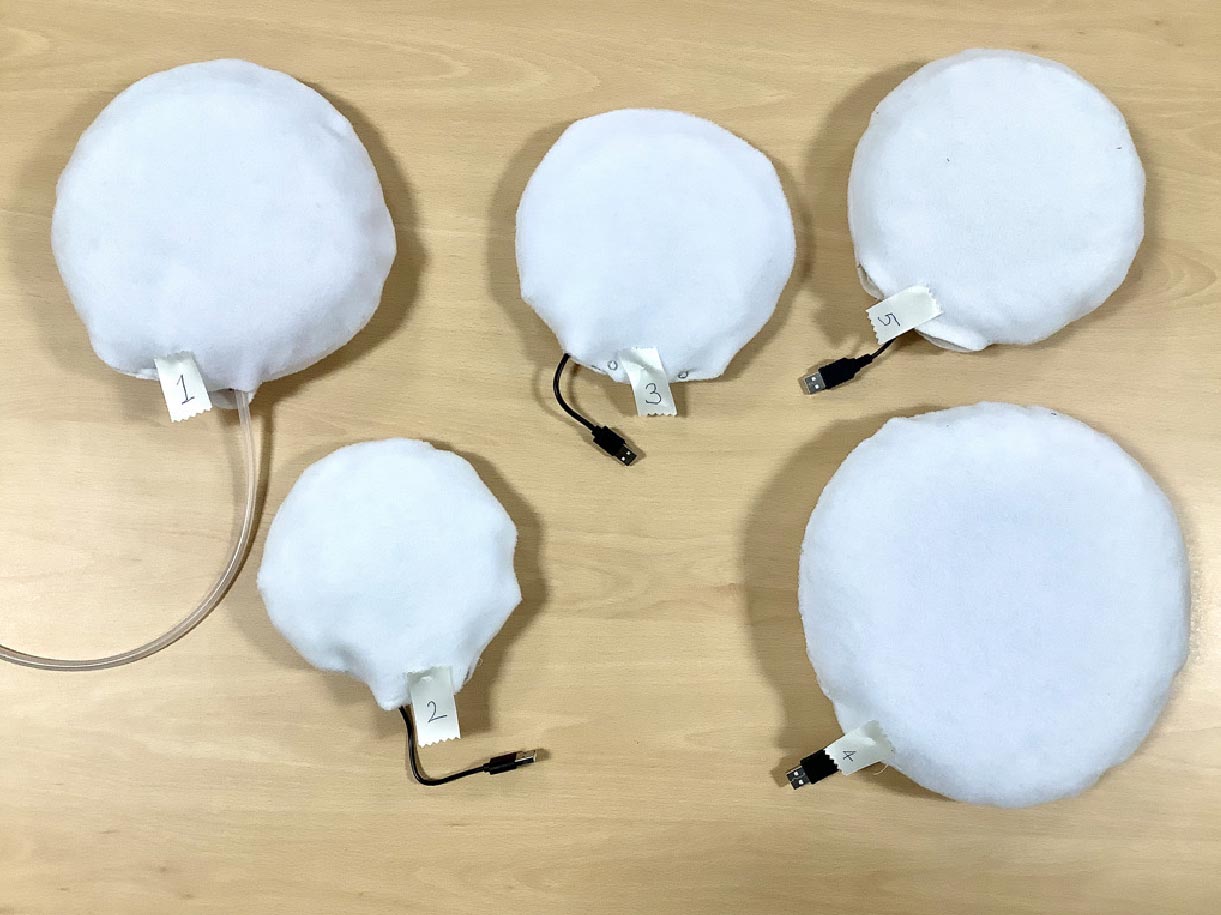 The focus group gave us a lot of feedback on the prototypes and direction for further prototyping. We selected the five most promising prototypes and improved them based on the feedback to be evaluated in a more formal in-person workshop. At the workshop the five prototypes were tested (breathing, purring, coloured light, breathing + purring and heart beat) as well as a range of textiles and cushion padding textures to inform the final cushion design. 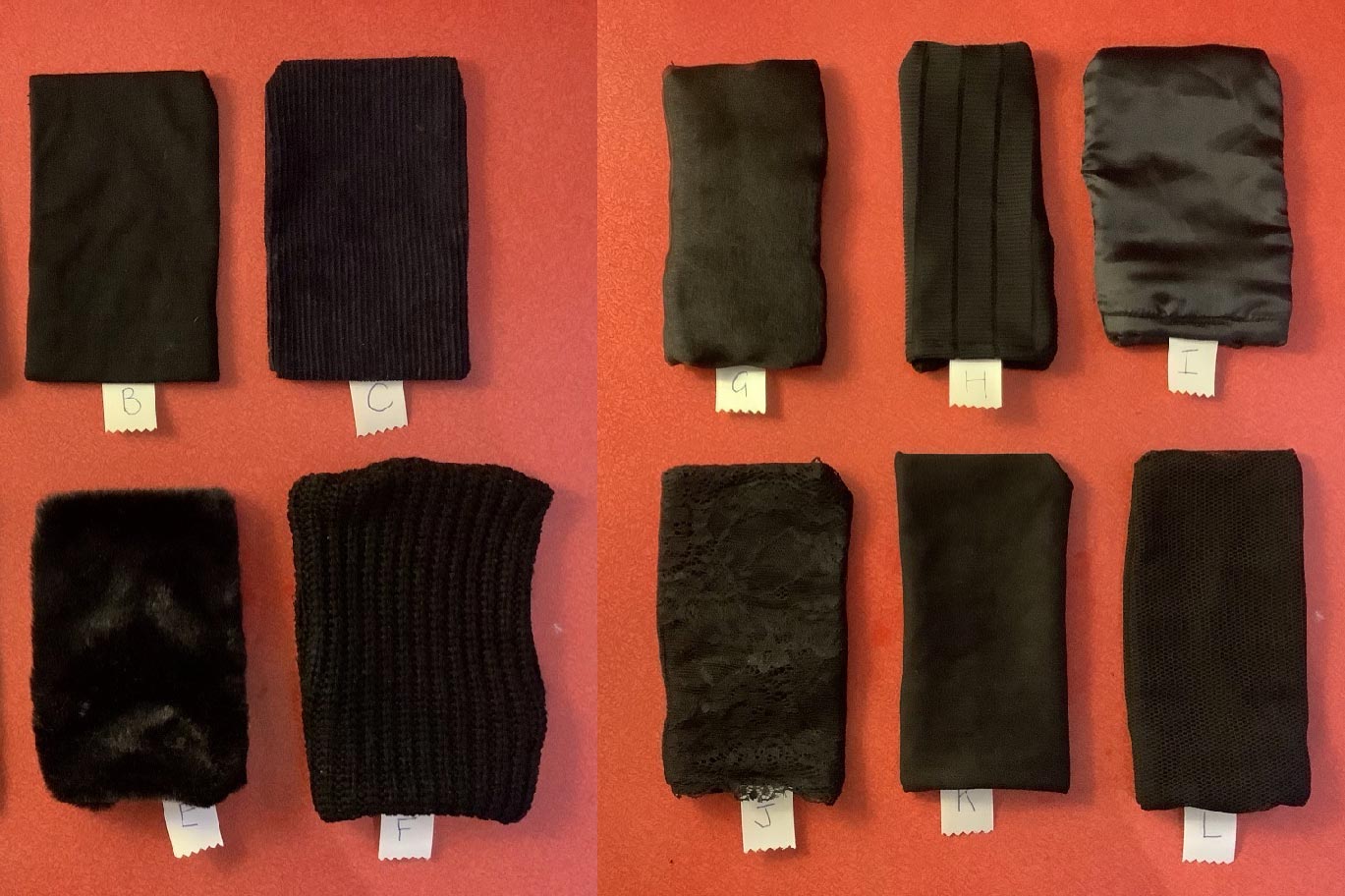 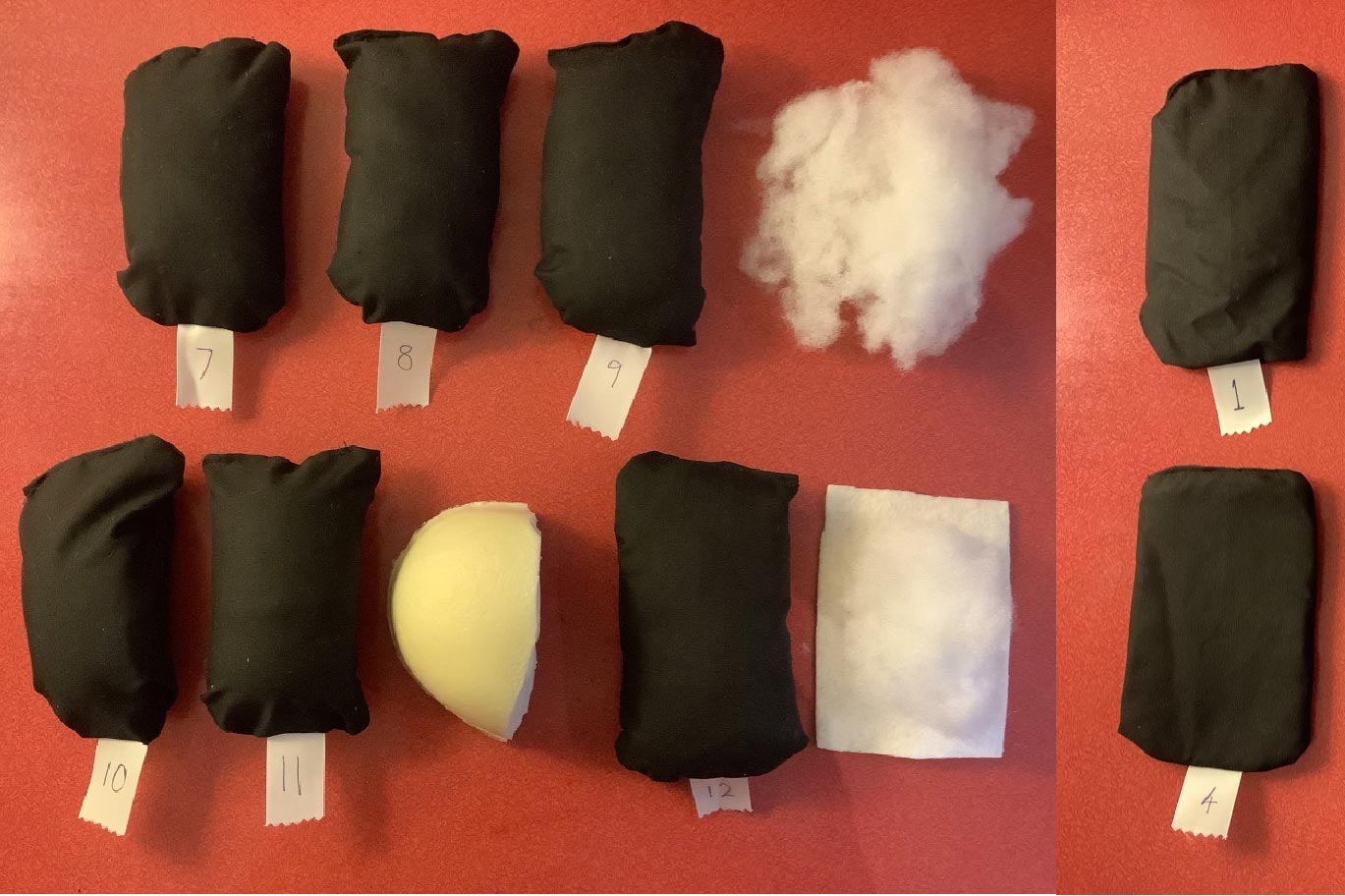 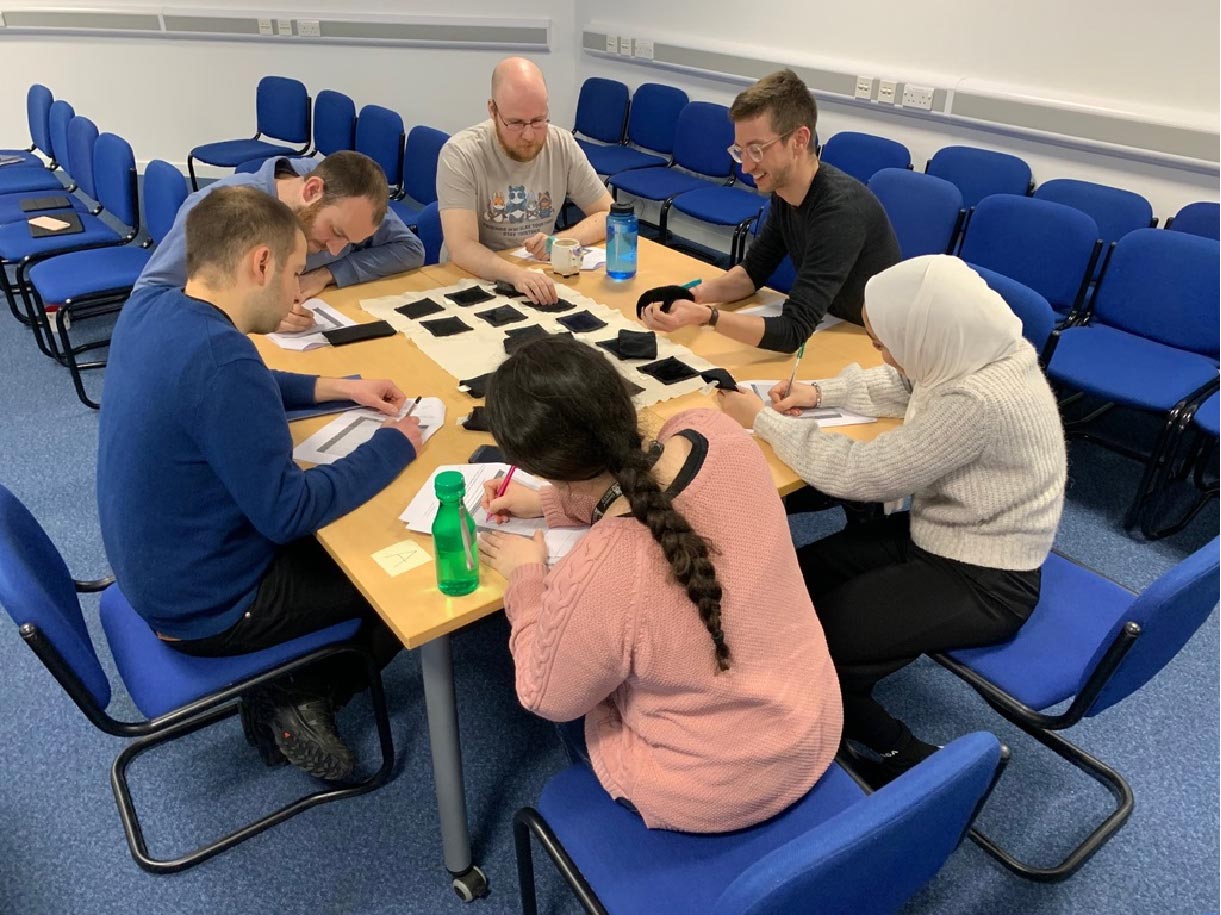 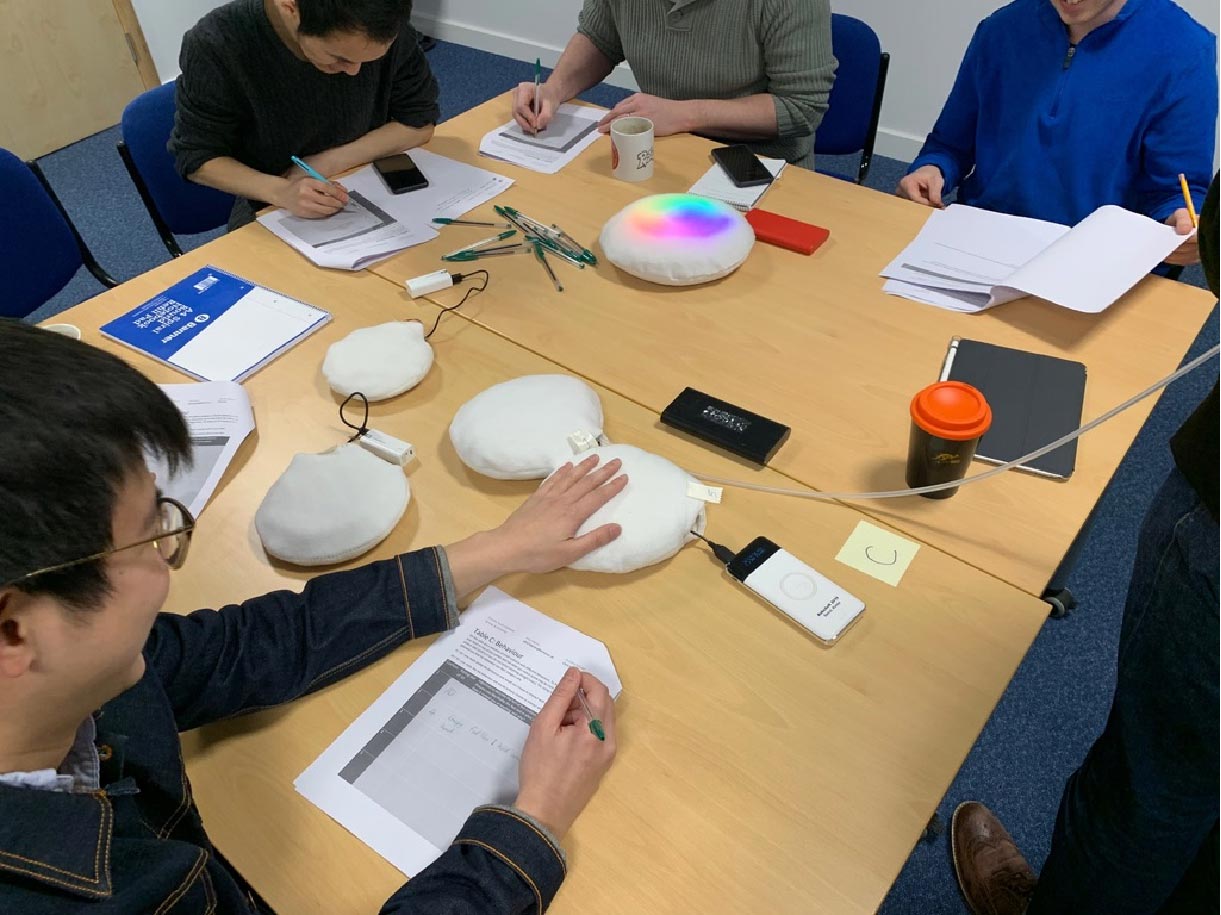 In both the focus group and workshop the breathing cushion received the most positive feedback and was almost unanimously enjoyed. People said that they started to follow the slow breathing of the cushion with their own breath and that it was soothing and comforting.

The next stage was to develop a final prototype of the breathing cushion and formally evaluate it for it's effect on anxiety. We took the feedback from the workshop to decide the fabric, feel and shape of the cushion which is shaped to comfortably fit against the body and be hugged. The fabrics are soft microfibre and corduroy.

In creating a mechanism to drive the cushion (since it was previously manually driven) it was vital that there was no mechanical vibration felt through the cushion as this was specifically one of the features that people most liked - the breathing cushion's silent and peaceful breaths. We acheived this by keeping the mechanism separate to the cushion. A 500ml capacity syringe powered by a motor inflates and deflates the cushion. 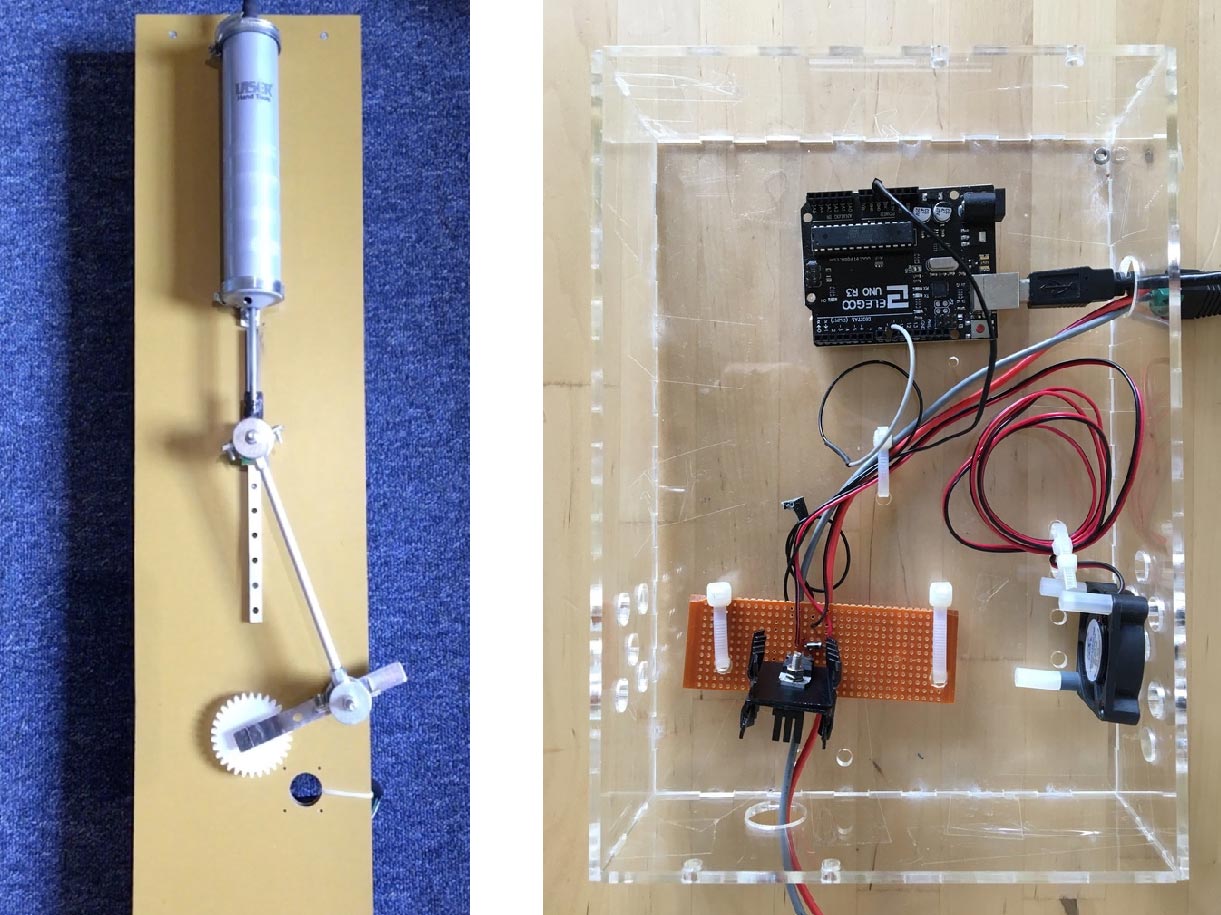 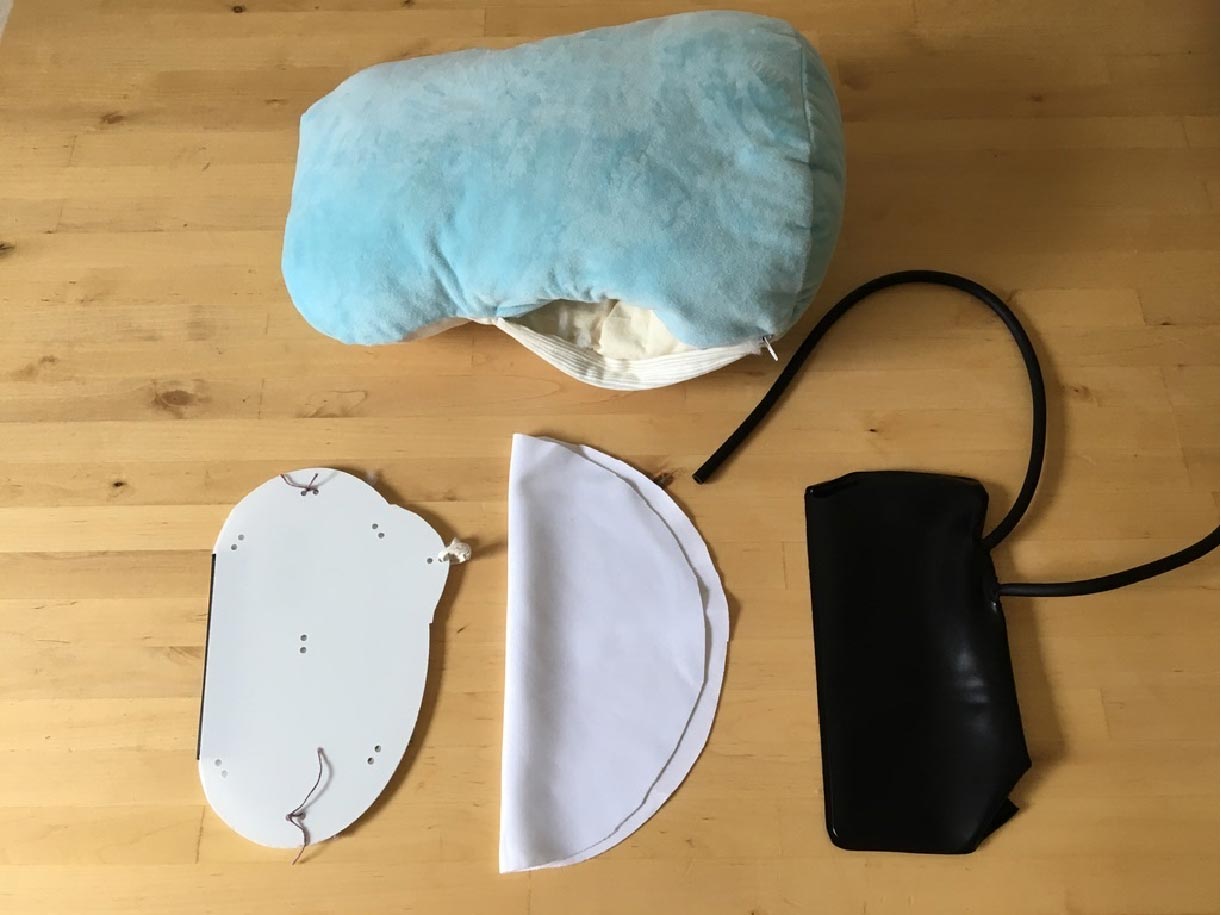 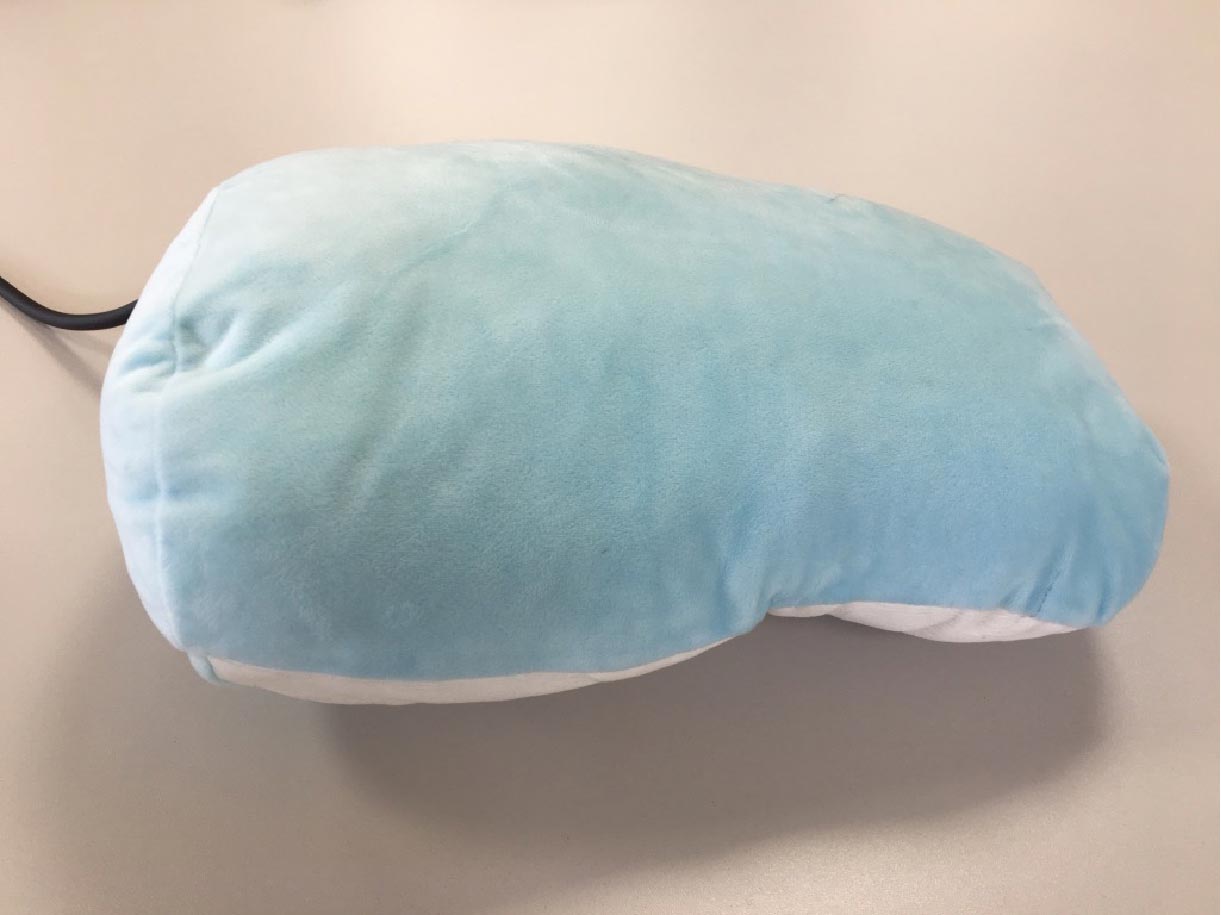 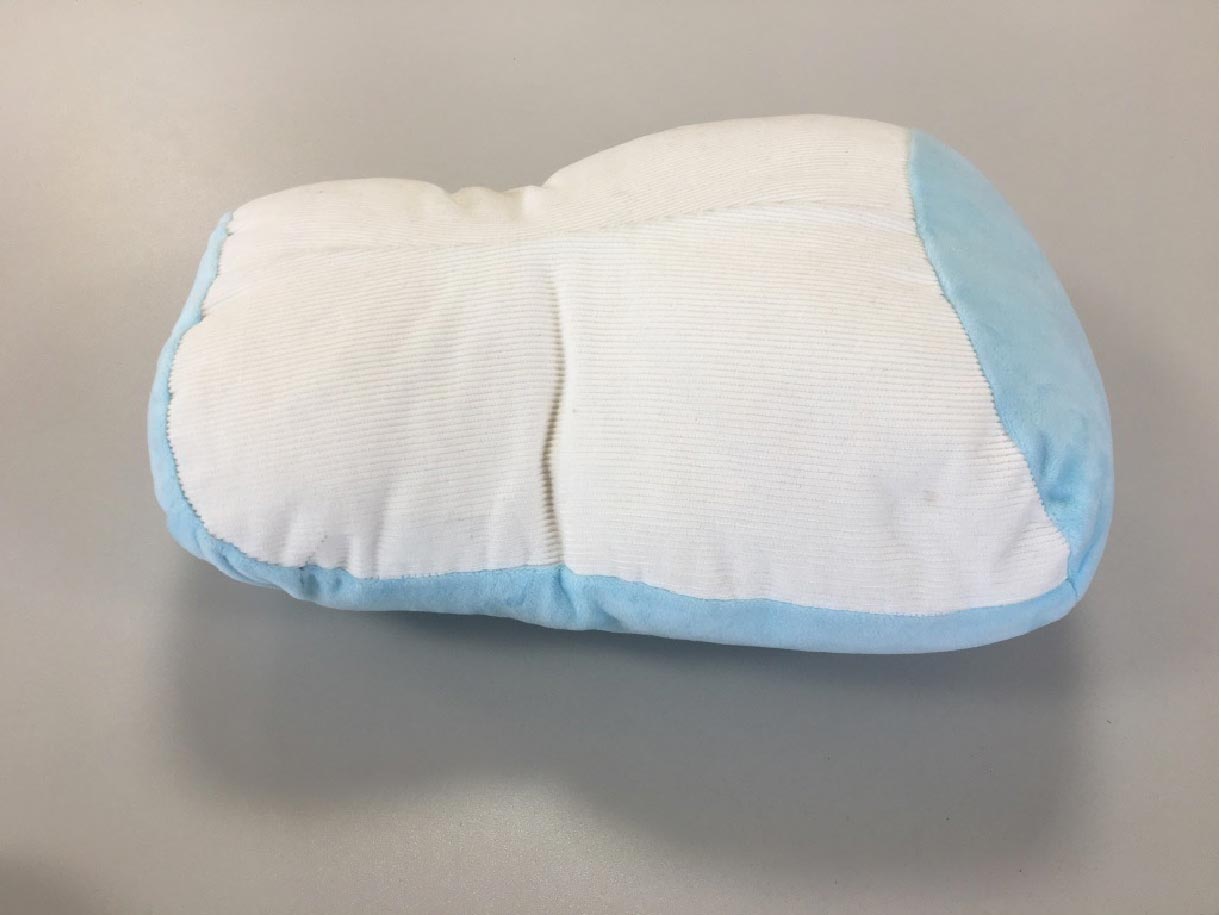 The breathing cushion was then tested in a formal psychophysical experiment in which participants were put into an anxiety-inducing situation and given one of three activities; the cushion, a breathing meditation or nothing. The results of the experiment found the cushion and the meditation both to be effective at reducing anxiety and equally so, without providing any guidance to people in the cushion condition. We also found that the cushion may be more effective for people who already have higher trait levels of anxiety. This was a really exciting result.

One of the key motivations of the project was to create an interface that is widely accessible and could provide anxiety relief to people who find many existing methods or treatments either inaccessible or undesirable. We approached RICE in Bath to develop a focus group with people with dementia and their carers to get feedback from them on the cushion since they are a population that experience high levels of anxiety and can find many of the existing interventions inaccessible. We met with three people with dementia and their partners (also their carers). All six participants had a very positive response to the cushion, they enjoyed hugging it - in some cases not wanting to let it go! They loved the form and feel, and commented that it would be comforting in anxious situations such as when their partner was away from them. They also had very clear ideas on the personalised design they would choose for the cushion and practical points such as needing to be washable and all the electronics enclosed. We hope that from this initial feedback further research could be conducted leading to the development of a more practical (untethered) and commercially viable version of the prototype.